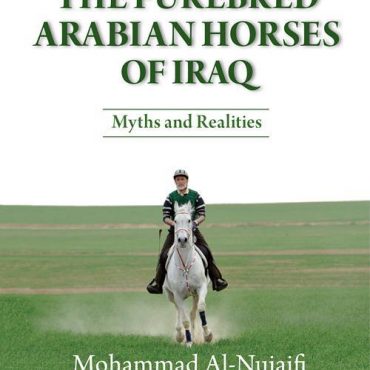 The Purebred Arabian Horses of Iraq: Myths and Realities by Mohammad Al-Nujaifi

The Purebred Arabian Horses of Iraq: Myths and Realities by Mohammad Al-Nujaifi

For the first time, the story of Iraq’s purebred Arabian horses is recounted in words and pictures bya prominent Iraqi whose family has been breeding horses for generations, since the family migrated north from Arabia with their prize horses to settle on the grasslands around Mosul in northern Iraq in the 17th century.

Dr Mohammad Al-Nujaifi has a deep understanding of the purebred desert Arabian horse, its origins, history and qualities, and his narrative corrects the Western-held belief that Arabian horses were bred and admired primarily for their beauty. It is speed, he argues, that has always been the essential characteristic sought and developed over millennia by the Arabs.

The book begins with the origins of the Arabian horse in pre-Islamic history and brings the story up the present day, and includes the history and current status of flat racing in Iraq.

Richly illustrated with recent photographs and many hitherto unpublished and historic images.