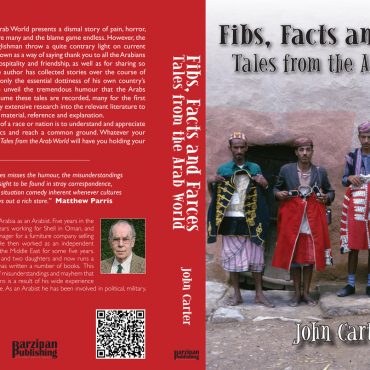 Fibs, Facts and Farces – Tales from the Arab World (1 in Stock)

Fibs, Facts and Farces – Tales from the Arab World

John Carter, the author of this light-hearted book with a serious message, is a self-declared ‘Arabist’. Having spent 20 years in Arabia, John has written this book in a bid to dispel the myths of Saudi Arabia being a country of ‘pain, horror and suffering’. A carefully considered book, Fibs, Facts and Farces – Tales from the Arab World includes stories the author has collected over the course of his time in Arabia and shows much of the humour of the Arab people, as well as their great gift for story telling, handed down from generation to generation.

The book is divided into four parts: Arabian Attributes and Traditions; the British and Arabia; Language; and Key Personalities. Also included is a useful appendix, looking at ‘language and things’. Told in a direct, easily accessible and punchy fashion, each area is tackled in an entertaining and enlightening way. For example, in Arabian Attributes and Traditions, there are various sub-sections covering everything from sense of humour and hospitality to politics, sport, animals and again to women, alcohol and corruption. One short anecdote that illustrates John’s style is in the ‘superstitions’ section:

There is a charming little story which is quite untrue, but everyone in Oman seems to know it. Like many Arabian stories it is rather inconsequential. During the Jebel War of the 1950s British soldiers in Fahud, where the first oil was found, caught a devil. They put it in a box and sent it to London Zoo. Omanis visiting London in the seventies and eighties frequently asked either to go to the Zoo to see the devil, or enquired after its welfare.

Naturally, in the section on animals, Arabian horses feature, and there is sub-section dedicate to Lady Anne and Wilfrid Blunt, and James Henry Skene, whom they appointed as their agent in Aleppo. “Skene seems to have had all the instincts of a second-hand car dealer,” writes the author, as he suggests that some of the pedigrees that we know and admire today could have “inconsiderable doubt” thrown on them. Interesting reading for sure!

Another entry worth reading, showing the importance of horses in the Arab culture, reads:

Saudi Arabia is the last country in the world to have been united by people on horseback, which should endear it to a British public hooked on horse racing. Another connection with horses that most people seem to have missed relates to the birth of children in the Royal Family. No one puts up a notice on the palace gate to announce the arrival of a new little prince. Instead the Riyadh papers will report a runner in a horse race to be owned by a prince not previously known. The horse is the gift of a proud new father!

All in all, this light-hearted book is one that the reader can easily dip in and out of. It certainly helps dispel some illusions about Arabia, as well as providing a unique insight.