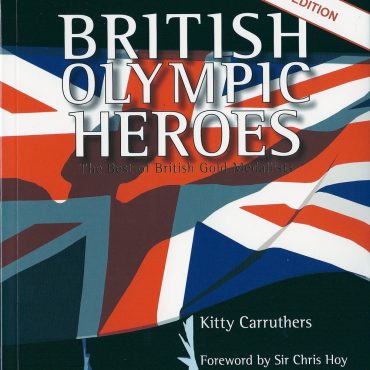 Here is the perfect guide to Britain’s greatest athletes of the modern Olympics – eminently readable, fun, fact-filled and fully illustrated, reprinted and updated for London 2012, to include the lighting of the 2012 Olympic torch, as Olympic fever grips the country. THe book covers medallists from both the summer and winter Olympics.

British Olympic Heroes features 70 outstanding athletes from Great Britain’s 116-year record (unbroken) of  attendance at the Olympic Games. Those included are not necessarily the most famous. They are, rather, the most arresting, whose sporting and private lives have been inspiring and impressive or sometimes downright incredible. All key statistics as well as many little-known facts are included. Many of Britain’s gold medallists have left a lasting legacy, while some made barely a ripple. In this book you will find those like Seb Coe, Chris Hoy, Kelly Holmes and Steve Redgrave – household names who have inspired countless others. There are also those like Tommy Green and the Doherty brothers who overcame adversity and emerged victorious, and others like Max Woosnam whose truly amazing prowess is all but forgotten today (and who once beat Charlie Chaplin at table tennis, playing with a butter knife!). And in spite of the title, the book would be the poorer without at least a passing mention of our spectacular failures and unlucky losers, like Eddie ‘the Eagle’ Edwards and Philip Plater. Our favourite partnerships are here – Torvill & Dean, the Three Blondes in a Boat, Harry Llewellyn & Foxhunter, Nash & Dixon, along with the heroes of old – Eric Liddell, Viv Woodward, ‘Leaping’ Lord Burghley, Harold Abrahams, Kitty Godfree and many more. Also of note is equestrian medallists Harry Llewellyn and Jane Bullen (Holderness-Roddam).

Every entry is illustrated, and sections include: